The Plastic Apocalypse: Revealing The Truth Of Plastic Sustainability

Plastic and sustainability are not two words you find in the same phrase very often. After all, with the terrible repercussions of plastic use, such as the great pacific garbage patch and the increasing presence of microplastics in the environment, plastics are anything but environmentally friendly, right?

Think again. Much of what you have heard about plastics in mainstream media, online forums and social media websites are often short on facts while boasting questionable numbers.

When you actually take the time to look at the science of sustainability and compare the life cycle assessments of the most popular packaging materials such as glass, metal, plastic, cardboard, paperboard, and paper, plastics come out as the most sustainable option almost every time.

So why is it that whenever we hear about plastics on the evening news or social media, it is always something about how bad they are for the environment?

And that brings us to today's topic: The Plastic Apocalypse.

Now, when most people hear the word apocalypse, they think of things like "the end of the world" or perhaps "a nuclear explosive event."

But the word apocalypse does not mean the end of the world. Our modern English word apocalypse comes from the ancient Greek word apokálupsis, which means to reveal or revelation.

Plastic Sustainability: Are Plastics As Bad As They Have Been Made Out To Be?

With each passing year, it seems as if the battle cry from the public to reduce or altogether ban plastics gets louder and louder.

And this is happening even though, time and again, the science shows that plastics are the most sustainable option of the most popular packaging materials available today!

One of the more prominent motivating factors in this phenomenon has been the public's exposure to what we have come to know collectively as the great pacific garbage patch.

The patch's longitude and latitude are roughly 135°W to 155°W and 35°N to 42°N. This floating ensemble of plastic waste and garbage manifested from the Pacific Rim, namely, countries from Asia, North America, and South America.

Thanks to over-the-top major media coverage, many of the public believe these are literal mountains of plastic trash that can be seen from miles away.

However, this is false. The patch's low density (4 particles per cubic meter (3.1/cu yd) causes the patch not to be detected by satellites or even easily seen by the naked eye of boaters or deep sea divers in the area.

The story of the patch has gone viral, with millions of people worldwide calling for companies to ban single-use (and even recyclable) plastics. These include items such as PET bottles, plastic cutlery, straws, and cups.

One of the main problems with this is that the majority of the patch is not, in fact, consumer plastic waste. It is primarily industrial fishing gear that has been lost at sea.

But, this has not stopped many major and minor news and media networks from capitalizing on the public outrage and continuing to muddy the waters about plastic sustainability, often pointing to the patch (which in reality only features about 2-4lb of plastic per square mile of ocean).

And while there should not be any plastic in our oceans, the plastic that is there, is not plastic bottles, spoons or other consumer plastic packaging. It is in part the previously mentioned fishing gear and also microplastics.

Microplastics (which have been shown to be non-toxic) are produced primarily by the washing of synthetic clothing rather than plastic littering and consumer waste. 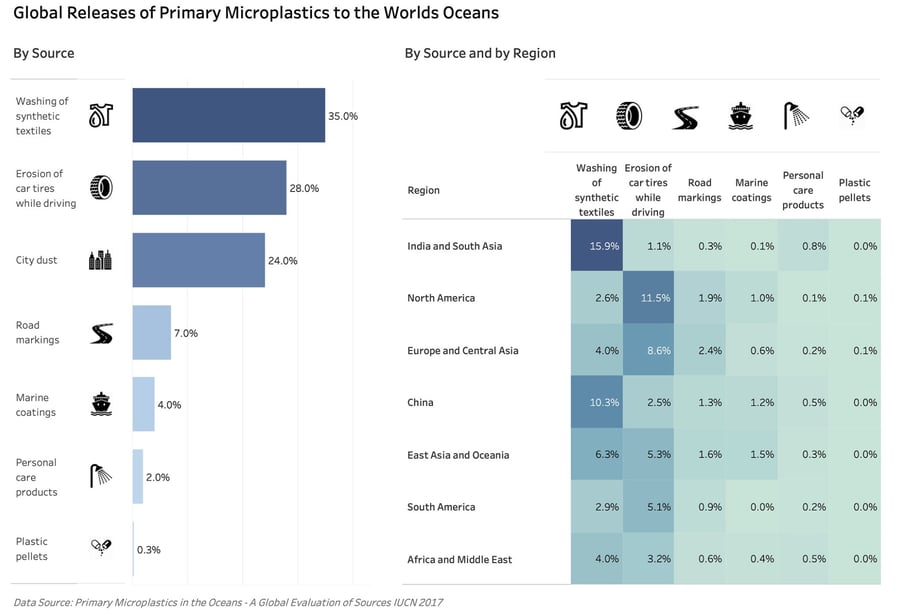 But, there is of course a lot of plastic packaging litter on land and its the worst material for the environment, right?

Looking for sustainable packaging? We can help!

Plastic Sustainability: The Truth About Plastic Waste And Litter

OK, so the actual amount of plastic in the great pacific garbage patch has been proven to be totally overblown. But there is plastic litter all over the place on land, so it must be terrible and make up most household waste, correct?

As it turns out, plastics account for just 13% of all US household (municipal solid) waste by weight and under 0.5% of total waste.

Now that is just talking about waste in general; what about litter specifically? Where ever you go, you can usually find an area in just about any town nationwide where there is an issue with litter on the side of the road, residential areas, or other places where people have improperly disposed of waste, such as plastic bags.

And, in these areas, most litter must be plastic, right? Not according to this life cycle assessment study from Clemson University analyzing an 18-year period!

This life-cycle assessment study from Clemson university confirms beyond a shadow of a doubt that a collection of all of the statistic-based, scientific studies of litter in the United States of America and Canada over an 18-year period proves consistently that plastic bags (including grocery bags, trash bags, dry cleaning bags, and retail bags) make up a tiny portion of litter, most often less than 1%.

Banning Single-Use Plastics Would Be An Epic Environmental Failure

In addition to drastically raising the price of practically all the goods you want or need, this would be an environmental failure of epic proportions.

Carbon pollution would rise drastically, and everything would become more expensive. Banning single-use plastics makes no sense whatsoever based on science. And, if these bans are implemented, your wallet and our planet earth will take a major blow!

This is probably one of the harder truths that we have presented to you, and I am sure some of you are literally exclaiming, "that can't possibly be true!"

Simply put, when compared to the most popular packaging material alternatives, such as glass, metal, cardboard, and paper, most of the time, plastic is the more sustainable option.

And you can see the facts for yourself with the 18 life cycle assessments in the link above, all of which are peer-reviewed studies from top universities, governments, and entities similar to the EPA from countries worldwide.

This is due to the fact that over the entire life cycle of the packaging materials, more carbon is produced by glass, metal, cardboard, and paper than by plastics.

Now, you might be thinking, "but metal, glass, cardboard, and paper are all recyclable! And you would be right." But they are still less sustainable as these materials produce more carbon during their entire life cycle, even if they are recycled at the end of life.

This is partly due to the transportation of these materials, some of which (glass and metal) are extremely heavy and produce far more carbon during shipping and transportation.

And, when measuring the total amount of carbon produced from manufacturing, delivery, implementation, disposal, and recycling of glass, metal, cardboard, paperboard, and the other most popular packaging materials, plastics come out as the most sustainable choice.

There are countless companies in the world racing to eliminate single-use (and recyclable) plastics. Many are doing this not in an attempt to save the environment but to appease consumers who think such actions are earth-friendly (when many of them they are not).

As you now know, based upon the many peer-reviewed life cycle assessments linked above comparing plastic to the most popular alternative materials (glass, metal, cardboard, paper, etc.), plastic produces much less carbon.

As shown above, when it comes to the impact of litter and waste, plastics are still the more sustainable choice. So, why are so many businesses talking about or actually implementing the replacement of plastics for materials that are proven to be more harmful to the environment?

This is primarily because the public has largely bought many of the falsehoods presented in the media, hook, line, and sinker with copious amounts of continually repeated, reshared, and reposted misinformation about plastics.

And, to at least seem more earth-friendly, many companies are choosing to appease the public's call for banning plastics, even though some of these companies know that switching out plastics for other materials will have a more significant negative impact on the environment.

Want to learn more? Check out this interview in which I speak with Lisa McTigue Pierce, Editor in Chief of Packaging Digest.

In this interview, we discuss these hard-to-swallow truths while providing insight into how and why plastics are being unfairly attacked in the media and the truth about plastic sustainability.

Where Can You Learn More About Plastic Sustainability And Sustainable Packaging?

Are you interested in learning more about plastic sustainability? Are you searching for truly sustainable packaging materials for your products?

Would you like to learn more about sustainable packaging practices, materials, and machinery? If so, you will want to explore our learning center.

Here, you can discover eye-opening articles about sustainable packaging, such as Is Flexible Packaging An Environmentally Friendly Choice? An Honest Assessment.

With all the information here, you should be able to find answers to many of your questions about sustainable packaging.