Biopolymers, Shrink Film And The Environmental Concerns Of The Future

As we have discussed here in the past, shrink film is currently one of the most environmentally friendly packaging supplies in the world. And while many people seem to be turning away from plastics due to their environmental concerns, the science of the situation regarding plastic often does not align with peoples emotions towards the material.

Despite the fact that plastics generally have the lowest carbon footprint of any packaging supply, companies around the globe are slowly opting to turn away from plastics to heavier materials like glass, metal and cardboard. However, all of these materials have significantly higher carbon footprints than plastic. In this article we will discuss traditional shrink films as well as their new bio-based versions and alternatives and why they are the better choice when considering sustainability and environmental impact.

And while at first glance these feelings toward these materials seem justified, the science points to the fact that plastic packaging such as shrink film is far more environmentally friendly than glass, metal and cardboard.

Now, I am sure some of you are shaking your head thinking; but, but, but, THE OCEAN! To be clear, I am not suggesting that plastics do not pose a significant problem to the environment.

They are particularly detrimental to our rivers, streams and the ocean. When we have literal mile wide islands composed entirely of plastic waste floating in various parts of the world (such as the great pacific garbage patch) it would be foolish to claim otherwise.

That being said, despite these issue, plastics still pose a lower threat to our environment than the currently available alternatives such as glass, metal and cardboard. This is not an opinion. Rather, it is scientific fact.

The uncomfortable truth is that while switching to glass, metal or cardboard may (and may not) result in less pollution in our oceans, it DOES NOT solve the problem of pollution at all. In fact, if we switched to these materials and replaced all plastic packaging with them, we would be creating a much bigger problem.

The carbon footprint of these materials are about 130% higher than their plastic alternatives. Additionally, the longer shelf life that plastics provide for food reduces manufacturing costs and further freight emissions than using glass, metal or cardboard alternatives.

As such, the resulting carbon emissions from transporting these items across the globe would simply be moving the pollution from our oceans (while greatly increasing it), and diverting it into our air supply.

The other fact of the matter is, there is lots of glass and cardboard material in the ocean as well, it may not be floating or as easy to see, however. Its more about real recycling and disposal issues that have caused this. For example, did you know you can recycle shrink film?

In our modern day, air pollution has already grown over 5% year over year since 2016. Dumping more pollution into our air is no way to save our oceans. From ecowatch.com

"The report issued by the National Bureau of Economic Research found that fine particle air pollution, known as PM2.5, dropped by 24.2 percent from 2009 to 2016. However, in the following two years, it increased an average of 5.5 percent each year. PM2.5 is particularly concerning because its microscopic size means it can easily enter the respiratory tract and be absorbed into the blood stream.

"The health implications of this increase in PM2.5 between 2016 and 2018 are significant," the study's abstract says. "The increase was associated with 9,700 additional premature deaths in 2018. At conventional valuations, these deaths represent damages of $89 billion."

The growth of the U.S. economy coupled with looser regulations has led to an increase in diesel powered trucks and other polluting-emitting vehicles on the roads, as well as boosted manufacturers' carbon emissions, Clay and Muller wrote, as CBS News reported."

If we are going to be honest with ourselves and look at the data and science, this pipe-dream of replacing plastics with materials boasting significantly higher carbon footprints to save our environment is nonsense at best and dangerous to our health and well-being at worst.

Yes, plastics post a great threat to our oceans but switching to these high carbon footprint alternatives is not the solution. In addition to removing the plastics from our oceans, using them to generate new up-cycled products and practicing better recycling procedures, using the materials with the lowest carbon footprint is the way to go... for now.

Now, I am not suggesting that plastics do not pose their own notable problems to the environment. On the contrary I am simply trying to be transparent about the green-washing of materials that are being pushed to replace plastic.

These materials often produce "feel-good" emotions about sustainability while simultaneously producing more pollution than those we currently employ.

When it comes to solving BOTH of these issues, the solutions rest in the bio-based and plant based packaging materials of the future... 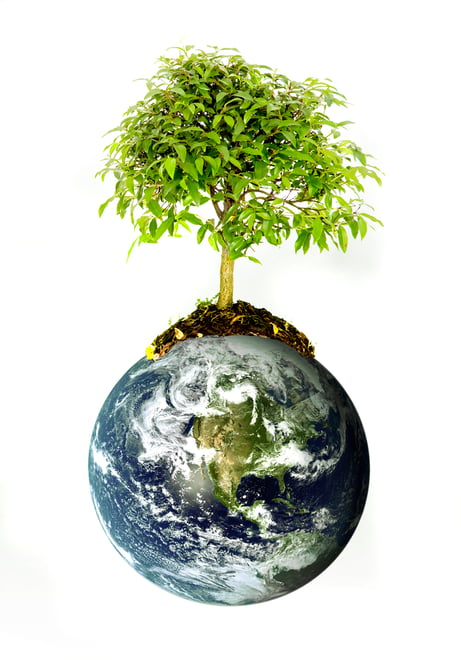 Bio-polymer based shrink films and plastic products (such as Nurel) are the (non) "plastics" of the future.

Materials that look and feel like traditional plastics, but are made from plants and earth-friendly compounds that bio-degrade and compost, rather than sit in our landfills and oceans for hundreds of years.

But wait, what exactly is a bio-polymer? From wikipedia:

"Biopolymers are polymers produced by living organisms; in other words, they are polymeric biomolecules. Biopolymers contain monomeric units that are covalently bonded to form larger structures. There are three main classes of biopolymers, classified according to the monomeric units used and the structure of the biopolymer formed: polynucleotides (RNA and DNA), which are long polymers composed of 13 or more nucleotide monomers; polypeptides, which are short polymers of amino acids; and polysaccharides, which are often linear bonded polymeric carbohydrate structures. Other examples of biopolymers include rubber, suberin, melanin and lignin.

Cellulose is the most common organic compound and biopolymer on Earth. About 33 percent of all plant matter is cellulose. The cellulose content of cotton is 90 percent, for wood it is 50 percent."

Traditional biopolymers are not necessarily the environmental fail safe that many have hoped they are... YET. However, new advances in bio-polymer production technologies such as the two aforementioned in the paragraph at the beginning of this section are closing in on truly earth friendly, bio-degradable alternatives. These organic compound based materials will (and some currently do) achieve the desired goal of many environmentalists.

Although there are currently only a couple of options and sources for these materials, there are many companies and scientists working to develop plant based alternatives to our modern day plastics. Unlike traditional plastics, these materials will bio-degrade and compost just like rotten vegetables and other natural items like grain, wood and plants.

If we are to truly attempt to be environmentally active and do what is best for our planet earth, we must set aside passionate presumptions that are based on emotions rather than data and science.

As uncomfortable as it may be to admit, as of now, flexible packaging and soft plastics are still the most sustainable choices for packaging supplies at this current time.

Switching to materials such as metal, glass and cardboard will only exasperate the already major problem of pollution while exponentially raising our carbon emissions.

In addition to taking both corporate and personal steps to better recycling practices and moving towards bio-polymer and plant based alternatives, choosing sustainable packaging supplies such as shrink film and stretch film is still the better choice for our environment.

As we continue to develop new ways to remove plastic from our oceans and to recycle said material into viable products, we need to base our choices on science.

As we mutually grow in our understanding of how to properly reduce, reuse and recycle the materials we choose to employ, together we can make a difference and help to protect our planet as well as our health and well-being.