Packaging And The Metaverse: AR, VR And Beyond

As we head deeper into the 2020s, it feels as if the future has truly arrived. We have come so far as a species. From smartphones and electric cars to privatized space exploration and the planned building of colonies off-world. The future is now!

But, outer space is not the only new frontier we are beginning to explore on a deeper level. We are also on the cusp of discovering and exploring the metaverse while mutually creating it through our digital footprints, interactions, and avatars.

You may be wondering, what does packaging have to do with the metaverse? Or, perhaps you are not even sure what the metaverse is.

And, while the space where the metaverse meets the physical realm has barely been explored at this point, it will be an area of focus for massive corporations and, eventually, smaller businesses as well.

After more than sixty-five years in the packaging industry, Industrial Packaging has watched how the precursor to the metaverse (the internet) has changed packaging for companies worldwide. And, we are always learning how new technologies will continue to evolve the realm of packaging.

In this article, we will explore the future relationship between packaging and the metaverse and discuss how this technological advancement will affect product packaging and branding for companies all over the world.

What Is The Metaverse?

The metaverse is a fully functional digital realm that exists beyond our own physical reality. The future culmination and integration of the fragmented virtual worlds will converge all digitally enhanced physical reality and physically persistent virtual or augmented spaces. Essentially, the metaverse is the future sum total of all virtual and augmented realities and the interconnections between those spaces and our physical world via the "internet of things."

Examples Of The Emerging Metaverse

If you have kids, or you yourself are into video games, you have probably heard of the computer game Fortnite. The game, which was created by Epic Games (the studio that built the groundbreaking unreal engine for game creation), is considered by some a metaverse in and of itself. Or, rather, a foreshadowing of what the metaverse may manifest as in the future.

The game is played over the internet by millions of people all over the world. Players battle each other in a 3D animated, highly colorful cartoon world.

Players cumulatively spend millions of dollars on the game as they purchase custom clothing for their characters known as "skins". Fortnite is one example of what in the future may be called "the metaverse."

Roblox is a digital gaming platform and game creation software made by the Roblox Corporation. It gives users the ability to easily create, program, and share custom video games with other platform users.

While popular with children, millions of adults use the game as well. Like Fortnite, it allows users to create custom digital avatars to represent themselves in a colorful digital world where they can play and socialize with millions of people all over the globe.

In many ways, Roblox shows a more dynamic vision of what the metaverse will be in the future. This is because players create their own virtual worlds and gaming experiences within that virtual realm.

So, let's say you like to play the trendy summer game of 2021, corn-hole in real life. But, you want to share this experience with people living on the other side of the planet.

Roblox gives you the ability to re-create that real-life game in their virtual world and play with people from anywhere on earth. In this respect, Roblox shows the infinite possibilities that a full-on metaverse may offer to users in the future.

While gaming companies are at the forefront of building the foundation of the metaverse, they are not the only tech companies creating virtual experiences that reflect the emerging invisible architecture of the coming metaverse. 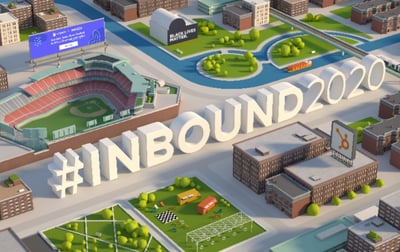 Hubspot is a marketing technology company that produces world-renowned CRM software that thousands of companies use for their inbound marketing efforts.

And while their software product is impressive in and of itself, they may be even more famous today for their internationally known mega trade show INBOUND.

The event, which up until last year was a live in-person gathering attracting over 30,000 people annually, has featured such celebrities including Comedian Chelsea Handler, American Horror Film Producer Jason Blum and coming in 2021, Legendary Talk Show Host and Actor Oprah Winfrey.

However, like most trade shows, there was no in-person event for INBOUND 2020. However, that did not stop the show producers from putting on a live event where people could mingle, socialize and advertise their business.

Rather than offer a website where you could watch live videos of the presentations, the INBOUND team created a virtual city space that you could navigate in a way similar to an online video game. Complete with shopping areas, a baseball field, local parks, and other virtual buildings that you could "visit."

Each of these places featured a collection of speakers and allowed attendees to attend their desired sessions virtually. Each virtual session space was branded with various company's advertisements of which businesses could purchase just as they would have been able to for POP displays or billboards in physical reality had the event remained in person.

This example shows how the metaverse will emerge while simultaneously being built through entertainment and non-entertainment-based digital spaces. People can socialize, purchase products or services, and interact simultaneously with the natural and digital worlds.

From The Internet To The Metaverse: Computers VS Augmented And Virtual Reality Goggles

So how will the metaverse be different from the internet as we currently know it? Well, for one thing, those companies who wish to be big players or perhaps even the overlords of the metaverse are betting on a shift from computers and smartphones to virtual reality helmets and augmented reality goggles. 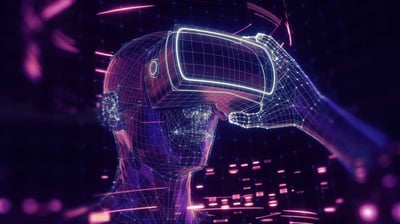 For example, Facebook CEO Mark Zuckerberg turned heads when he announced at a recent press conference in June of 2021 that the new focus and mission of the world-famous social media network had changed.

With nothing less than what can be described as true audacity, Zuckerberg explained how the new goal of Facebook would be to single-handedly build a complete and fully functional manifestation of the metaverse. His intensely macrocosmic vision has been both applauded and, in some cases, scoffed at by business people and futurists alike.

Regardless of the push-back, Zuckerberg is pushing forward to produce an entirely virtual world that can be accessed exclusively through Oculus virtual reality headsets. The headsets, designed and made by Oculus VR (a company recently acquired by Facebook), give the wearer the ability to fully immerse themselves in a three-dimensional virtual world that can be experienced in a complete 360-degree perspective.

The headset allows you to explore virtual worlds as if you were actually present in those worlds as we are present in our physical bodies during day-to-day life.

Zuckerberg is betting on the idea that someday, entering the metaverse to socialize, shop, enjoy entertainment and attend virtual events via an oculus headset will be as common as scrolling on your smartphone.

Packaging In The Metaverse

At this point, you are probably wondering, what the heck does packaging have to do with the metaverse? And that is a fair question.

When it comes to the successful synthesis of physical packaging materials and digital worlds, there is no better example to illustrate this symbiotic relationship than Pizza Hut's Augmented Reality Packaging campaign.

The genius marketing department at Pizza Hut designed a whole set of packaging materials and flyers that allow consumers to interact with an invisible digital world created by the world-famous pizza chain.

By using a smartphone or tablet, you can scan their pizza boxes, food containers, and brochures to get exclusive offers, coupons, video games, and other interactive experiences that can only be accessed through the devices above.

These unique digital experiences entice consumers to connect their digital footprint to the Pizza Hut brand and integrate their products into their avatar or digital identity.

These experiences cause Pizza Hut's customers to become a dedicated fan base who happily share these experiences on social media, further expanding the brand's presence in the digital realm of which the metaverse will eventually enfold.

As the architecture of the metaverse is built by technology and gaming companies, brands like Pizza Hut, who implement these capabilities early on, will have greater marketing and sales capabilities than their competitors, who are limited to physical reality.

By using your packaging materials as a portal into virtual and augmented realities, you can gain new business from within the metaverse that you would not have otherwise!


How Can Augmented Reality Packaging Benefit Your Business?

Are you interested in learning more about the metaverse and how implementing augmented reality packaging can help your business sell more products?

If you answered yes, you would want to consider reading this companion article, Take Your Packaging to the Next Level with Augmented Reality. With the information in this article, you will have everything you need to figure out if augmented reality packaging is suitable for your business.