Think back before the arrival of COVID19. Many people were reducing their use of plastic products. Plastic shopping bags, single-use containers, and packaging were all being slowly fazed out.

Shortly after the arrival of the pandemic, however, things changed—the EPA relaxed environmental protections. And then, some states banned reusable bags. In their place, the resurgent single-use plastics.

This move was a complete 180 in plastic consumption trends to that point. Since the pandemic, we’ve seen a big comeback of single-use plastics.

The packaging industry was no different. There was an initial boost of interest in bio-based shrink films before the arrival of the pandemic. But, after COVID arrived, many companies switched back to traditional plastic films.

You might be thinking that plastics are all bad. But, you might be surprised to learn about the real pros and cons of plastic shrink film. But, which type of film is right for you? Bio-based film or plastic film?

With over six decades in the packaging industry, Industrial Packaging has learned a lot about shrink films. During that time, we have found that sometimes, traditional plastics are actually the better choice. And, sometimes, bio-films would make more sense for specific applications.

This article will take a look at the pros and cons of biodegradable films and plastic films. As a result, you’ll have a better understanding of each product. And, you will be able to make an informed decision about the proper film for your needs.

What Are The Pros And Cons Of Biodegradable Shrink Films?

Many consumers are focused on trying to reduce the harm to our planet earth. As such, biodegradable plastic alternatives are quickly becoming popular in Google searches. Just as it is with other types of bio-based plastic alternatives, bio-films are becoming very popular with consumers and are highly marketable to those seeking "green" options.

Bio-polymer-based films like Nature Star are made from plants. Nurel is another brand of biodegradable plant-based film alternative. These products are made from biopolymers. And, they are the earth-friendly "plastics" of the emerging modern world.

These materials have a similar physical texture and aesthetic to traditional plastics. But, they are created from plant-based, biodegradable, and sustainable compounds. These compounds break down naturally into their plant-based byproducts.

For the environmentally minded, biopolymer-based films may seem like a godsend. Some might even call them a miracle. This cutting-edge technology might be both of those things. But, there are some drawbacks to using these bio-polymer-based film alternatives.

Bio-polymer-based shrink films like those detailed above are few and far between. There are currently only a few brands available. And they can be pricey when compared to traditional plastic films.

These bio-films are not commonly used on many packaging lines the world over (yet). So, these new materials have not been put to the test in many real-world applications. It is unclear if they will be able to offer the same qualities that plastic film provides. Those qualities include strength, clarity, gloss, haze, and other related elements.

While many people think you can just toss bioplastics and bio-based films on the side of the road or in the woods to decompose, this is not true. To get the ecological benefits from these materials, you need to compost them properly.

That means they must be composted at an industrial composting site or a home-based composting pile. If they are not properly disposed of in one of the ways above, they will not biodegrade properly. Additionally, bio-films are not recyclable. If they are tossed into the recycling, they will be removed and thrown in a landfill.

What Are The Pros And Cons Of Traditional Plastic Shrink Films?

Plastic shrink films are easy to source. Even with the disruptions in the global supply chain, they are easier to obtain than their biodegradable counterparts.

Plastic Shrink Films Are Time Tested And Approved For Many Applications

Plastic films are trusted and well-known packaging materials. These films have stood the test of time. They are currently used on millions of packaging lines worldwide.

There are well-known environmental issues with most flexible packaging plastics. But, they still have significantly less of an ecological impact than the most popular alternatives. This is due to their much lower carbon footprint than many forms of rigid packaging.

When it comes to flexible packaging supplies, plastic films are some of the most environmentally friendly packaging materials currently available.

Unfortunately, many people do not realize that shrink films are entirely recyclable. Depending on the volume of film being recycled, some companies may even be able to make a profit from recycling their used films!

Wrapping your products in shrink film is an easy way to boost shelf appeal. The glossy and reflective surface of plastic shrink films produces an eye-catching shimmer under store lights. If your products glisten on store shelves and your competitors do not, who do you think the consumer will reach for first?

Again, while plastic films are recyclable, many people are unaware of this. As a result, they end up in landfills. And, they find their way to waterways, rivers, streams, and eventually, the ocean. In this way, they contribute to a growing problem with ocean plastics.

Furthermore, there are some types of products that should not be packaged in shrink film. These products include any product that can not withstand the heat of a shrink tunnel. If your products are very heat sensitive, it is ill-advised to use shrink film to package them. 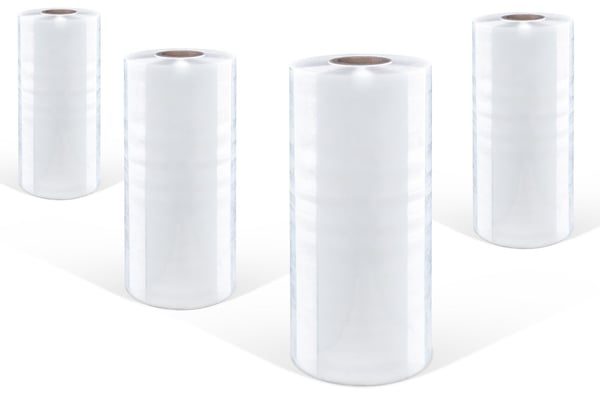 Shrink films are relatively inexpensive materials. But, the machinery required to use them properly is not. The range of investments for shrink tunnels and sealers can range from $10,000 - $100,000.

Do you have the budget or financing capabilities to make such large purchases? If not, shrink film may not make sense for your packaging needs. That being said, you can do small runs of products with a heat gun or table-top shrink tunnel. These types of machinery would cost you significantly less.

Despite the unpopular truth about plastic shrink films, consumers are continually calling upon corporations to discontinue the use of plastic packaging. As consumer demands to ban plastics in an effort to reduce damages to our oceans increases, plastic is becoming less and less appealing over time.

Which Type Of Film Is Right For You?

When trying to decide between bio-films and plastic films, you need to make a few decisions. Some of the questions that you’ll want to ask yourself are:


Where Can You Learn More About Shrink Film?

Are you curious to know what the difference between these two options is? Would you like to know more about the pros and cons associated with each option? If you would like to learn more, we would suggest that you read Domestic Shrink Film VS Imported Shrink Film: Which Is Right For You?

With the information in the article above, you will be able to figure out which choice makes the most sense for your unique packaging requirements.