Stretch wrapping is one of the most common tools for unitizing products for transport. However, just because a pallet is wrapped and looks good to the naked eye does not mean it is wrapped well, efficiently, or most importantly... SAFELY.

When the proper stretch wrapping is negated, problems can arise during shipping. Depending on the severity of the problem, your business may end up with a bruised reputation and potential safety failures.

Below, we will explore the various types of stretch film so that you can decide which is best for your particular applications and needs.

What Is Stretch Film?

Stretch wrap or stretch film is an extremely elastic plastic wrap that is stretched around various products (such as pallets of boxes) for shipping and transportation. The elastic recovery or stretchability of the film secures the products and ensures they are tightly bound.

Stretch wrap sticks tightly to itself and is used in millions of companies across the globe. It is often implemented in the unitizing of various products. Still, it can also be leveraged for packaging bundles of small objects. 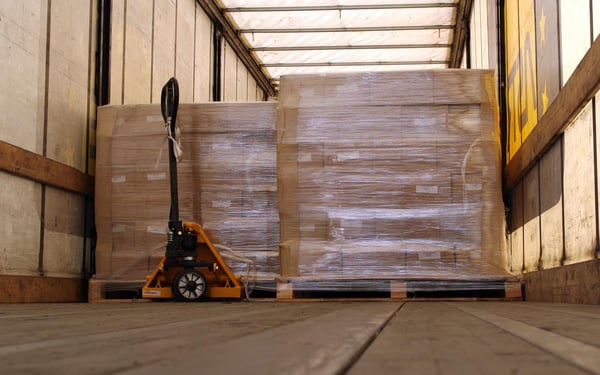 There are many different types of stretch film. Below you will find a list of each type. Beneath the list, we will investigate each film's capabilities, common uses, and varied dynamic qualities. You should take notes here as there is a lot of information to digest.

Machine stretch film was created to be used by a stretch wrap machine. It has the upper hand over hand film in various ways, including but not limited to quicker and greater efficiency in packaging, lower material spending, greater safety, and superior load containment. There are several kinds of machine stretch films: cast machine stretch film, blown machine film, and pre-stretched films. Cast stretch film is made by applying a comprehensive manufacturing operation called cast extrusion. This action mandates the continual thrusting of a thermoplastic substrate into a flat die and onto a cooled roll.

The film gauge is resolved by how quickly the casting roll drags the plastic away from the die. This treatment causes cast films to boast superior clarity, allowing end users to observe the wrapped objects. This film stretches easier due to the molecules being aligned as they're extruded.

While cast stretch film has multiple fantastic attributes, such as a more affordable cost than blown film, it does not hold a candle to blown film in sustaining strength or protection against tearing. Cast stretch film can generally stretch easily but has less robust stretch memory than other films.

Blown stretch film is created through a function called blown extrusion. This operation involves plastic melt being pushed into a circular slit die, resulting in a refined tube.

Next, the air is pushed into the tube, granting the volume of air enclosed to expand the tube to the optimal width. The tube is topped with an air ring which is then blown onto the substrate to chill. Chilling the material provides the blown film with greater strength and flexibility than other wraps.

As blown film is generally more robust than most other stretch wraps, it also boasts excellent resistance to tearing.

This is advantageous when containing loads with pointy edges vulnerable to collapsing thinner films. Blown films provide a high degree of memory when stretched. This means that packages remain secured.

Unfortunately, blown film is more expensive and has poorer transparency than other films. It also produces what some consider an annoying level of noise when compared to other similar substrates.

Pre-stretched film is expanded near its breaking point before it is wrapped onto rolls. This film does not necessitate as much energy as other stretch films to achieve the same wrapping force.

Hay baling stretch film is a multi-layer specialty stretch wrapping substrate made for wrapping baled rolls of hay. It is used primarily in the agricultural and farming industries.

Hand stretch film is made exclusively to be wrapped by human labor manually. It is also known as hand film, hand stretch wrap, hand wrap, or manual pallet wrap.

The capabilities of manual stretch film must be continually checked against the various potential improvements that come with switching to a stretch wrapping machine.

Selecting the proper stretch application for your packaging line will improve efficiency and result in a more cost-effective production. 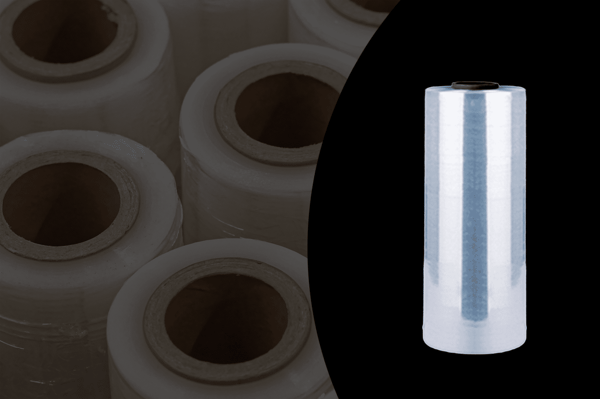 Ultraviolet film is a stretch film with special light-discouraging additives that defend it from photographic degeneration in applications where wrapped products are kept outside and exposed to the elements.

VCI, or Vapor Corrosion Inhibitor stretch film, is made specifically for wrapping metal components, so they don't rust. This formulation prevents the oxidation of metals and is commonly used for packaging tools, metal pipes, and other metal products or materials.

Reinforced stretch films are thick films with especially strong formulations used to package and protect hefty loads for transportation and shipping. For example, this type of film is commonly used for palletizing and unitizing bricks and cinder blocks.

In some cases, specialized wrapping projects require the implementation of performance films with multiple layers with very high stretch capabilities. In addition, gauge reductions can be used, resulting in uncommon thicknesses of stretch films for similar applications.

After familiarizing yourself with the different types of stretch film listed above, you will be able to start formulating your ideas on which is the best fit for your company and the products you are packaging with the packaging machinery or labor force that you have.

Depending on your budget, packaging line, and machinery, you may still not be sure which stretch film suits you. It would help if you considered reaching out to at least three vendors and asking for recommendations on a film that best suits your unique needs.

Getting a professional analysis of your packaging line, machinery, labor force, and current materials is also a good idea. With the information provided by said analysis, you can choose the best stretch wrapping solution for your business.

Finally, a quality preventative maintenance program will ensure that you always run the best stretch wrap for your particular applications.

As time passes, this program will allow for expert advice on making changes as new advancements in stretch wrap develop through technological innovation, product considerations, and the types of equipment you are utilizing.

Finally, if you are looking for more information about stretch film, you should review the complete guide to stretch film linked below.